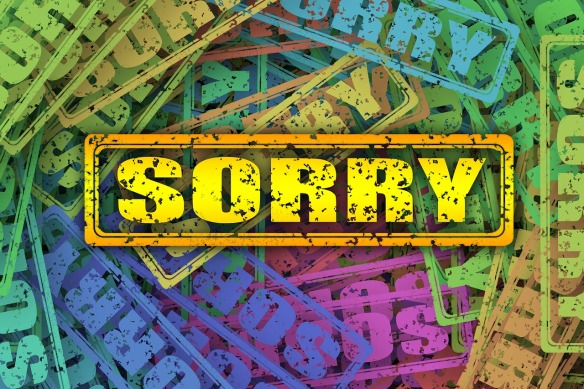 Do you feel you need to apologize?

People in recovery often feel they need to make apologies to others. Occasionally they do need to make them, but much of the time people in early recovery find that trying to apologize makes things worse rather than better.

The expectation of many recovering people is that making an apology should mean that the other person forgives them and then everything is all right. They want the relationship to be a good one, even when it never was good, to begin with.

Apologies frequently do not produce the result you expect.

The person to whom you think you owe that apology, they may well still be holding resentment towards you. Your saying you are sorry may not be followed by an “I forgive you and everything is now fine” response from them. Some people need to hang on to their resentments to protect themselves from being hurt again.

What oft-times happens is that the other person takes this opportunity to let you have it. They tell you in most certain terms how badly you harmed them and how mad they continue to be. They may want you to feel their pain by hurting you back, they may just need to be heard and as a result, can’t hear you.

At this point, the recovering person, now surprised that the other person is not accepting their apology, becomes upset, angry and a new fight begins. The effort to repair the relationship breach has resulted in a new conflict and this has happened well along in your efforts to stay clean sober or otherwise recover.

What went wrong with your apology?

Most of the people in a recovering person’s life have heard it all before. You have said you were sorry and then you did it again. Or for some, they have said they would do things and then because of their illness were not able to do those things. The others in your life felt let down if not downright lied to.

If you really would like to repair the damage from the past and mend relationships and apologizing might make things worse – what should you do?

Rather than apologizing you need to do something. Take action and show that person rather than telling them how you are different. Talk is cheap but action speaks so loudly words get drowned out.

The idea of amends comes from 12 step groups. The principle is that rather than saying you are sorry but doing nothing, you need to do things to set the relationship right. If you were not able to do things in your relationship in the past begin as soon as you are able to meet those role expectations.

If you never were able to clean up after yourself, begin as much as you can to pick up and put away the things you use.

Do not get carried away and set yourself up for failure. Do not try to wash every dirty item in the house on the first day. But do gradually begin to take the steps you need to do to be of service to the others in your life.

If you treated others poorly, were over critical, or always angry, try to be happy, helpful, and pleasant to be around.

Over time the changes others see in your will speak volumes about the kind of person you are becoming in recovery and this may be a better apology than any words you could say.