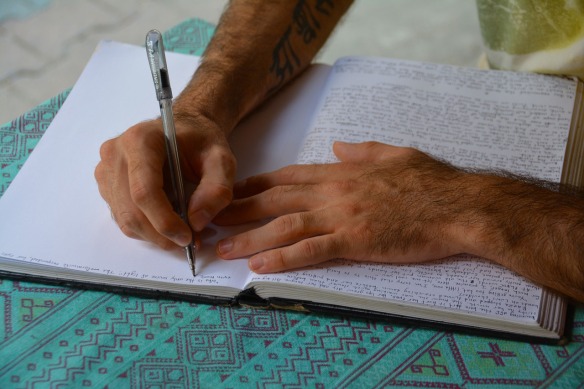 NaNoWriMo is a way to grow as an author.

The National Novel Writing Month is a mixture of competition and un-competition. During this month aspiring authors attempt to write an entire novel, a novel of at least 50,000 words, during the 30 days of November. That works out to 1667 words per day average. Each participant is competing with themselves to see if they can take an idea and turn it into a finished novel in 30 days. In the spirit of un-competition, anyone who completes their novel is considered a “winner.”

My experiences with NaNoWriMo.

I first heard about NaNoWriMo about 2010. The following year, 2011, I made my first attempt. That ill-fated attempt stalled somewhere around 5000 words. The remnants of that manuscript still reside in the ancient recesses of my computer’s hard drive. While that particular story has not yet emerged into the light of day, the lessons learned put me on the path towards becoming a better writer.

For the next few years, life happened. Then in 2016, I took another try at completing a novel in the 30-day time span. This time I was able to complete the project. That book, initially with the working title “thrift store” took two more years to revise and edit before it was published in late 2017. That manuscript spurred by NaNoWriMo grew from the original 50,000 words to over 80,000 and the title shifted to Casino Robbery, my first published novel.

Because of that accomplishment, I pulled out another one of my partially finished novels and earlier this year that manuscript now revised, edited, and retitled, ended up being published as my second novel “Sasquatch.”

In November of 2017 during NaNoWriMo, I started and finished a novel with the working title “Family Secrets.” Over the next year “Family Secrets” has been revised and edited several times. In 2019, I published that novel using the title Dark Family Secrets:

One of the lessons NaNoWriMo has taught me was the importance of setting deadlines. I have many incomplete books, both fiction and nonfiction, stored away on the hard drive still not finished, some going back 20 years. None of them were ever completed because there was always a busy life and the next shining project getting in the way.

Once I learned to make meeting the deadline my highest priority, at least for that limited period, things started happening. This process has worked for me in writing the first draft, revising, and finally pushing the publish button. I could have drawn each of these tasks out over more time but having a deadline on my calendar forced me to finish a project so that I could check that one off my list, and I would be ready to start on another project next month.

October is my time for preparation for NaNoWriMo.

I didn’t want to cheat myself out of the full experience of writing a novel in 30 days. Not that anyone else would’ve known if I had jumped the gun and started writing early, but I would’ve known. So, I don’t begin to write until November 1. What I do allow myself to do before that date is preparation.

The three books that were finished during NaNoWriMo had some similar features. I thought about the general idea, started making some notes, and selected a working title knowing that title might change. I try to prepare an outline, though it is never in any fine detail. As ideas come for events, scenes if you will, I digitally jot them down. As the scene list grows, I rearrange the order.

When I start to write its very likely new ideas will occur to me, and they will get inserted in my list of events wherever they fit. I’m also likely to find that some of the things I initially thought would be separate scenes all get used in a single chapter.

Another thing I try to have planned before November first is a list of the characters, their names, and a brief description of them. If I’m using a specific location, I may do a little research and write some notes on that location. None of this advanced preparation is firm. Once November 1 arrives, everything is subject to change.

The 2018 NaNoWriMo novel had the working title “Planning Accidents.” It was the second adventure for Arthur Mitchell, the protagonist from my first novel Casino Robbery. For the first time that year, I created a cover that I could use for the e-book edition of the book that ended up being “Planned Accidents” Since then I have completed two other novels.

So, what am I planning to write for NaNoWriMo this year?

I have two possibilities that I am outlining at the moment. I decided not to give you the working titles since I now know that the title will likely change in the process.

If you’ve ever thought about writing a novel, then NaNoWriMo this November, might be just the encouragement you need to get that first draft written. I’d love to hear your thoughts and comments about writing. If you have questions for me, please send them along. I’ll get back to everyone just as quickly as possible, though as you can see for the next month, I am likely to be extremely busy.