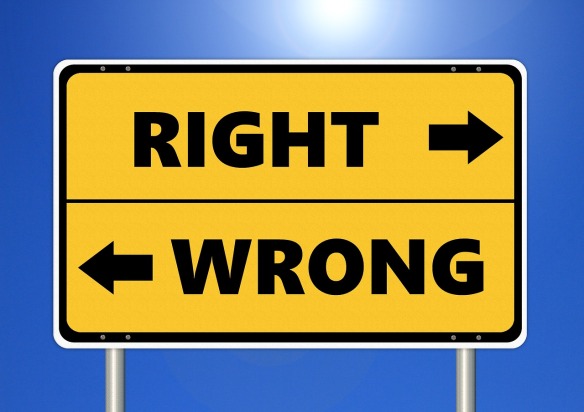 How did those in your life learn right and wrong?

If you look around these days you start to wonder if anyone knows the difference between right and wrong. All-day and every night the media is full of stories about wrongdoing. Each successive incident seems to top the last for cruelty and wrongness. It would be easy to become pessimistic.

The optimist will point to any number of past incidents of wrongdoing and say we are making progress. There are laws designed to prevent wrongdoing on an individual level and more worldwide awareness that when something wrong occurs anywhere in the world it affects all of us.

Occasionally we see a young child who has done some great deed of kindness and at a tender age has an apparent grasp of right and wrong, but that is the exception and not the rule. There are always more stories about some youth who has done some unspeakable deed.

Think for a moment about how you learned right and wrong. Did you have to figure it out for yourself or did someone teach you? If someone taught you, who? Have you continued to accept everything they told you or did you ever question? If you have children how are they learning right and wrong, from you or from someone else?

How do people learn right from wrong and how might we increase the number of people who know the difference?

There appears to be a process that people need to go through to learn the difference between right and wrong. What they learn depends on the student, the teachers, and the way the lessons are presented.

Just because you act well around your children or your spouse does not mean that those family members will learn your understanding of right and wrong. There are lots of things that can interfere with the process of learning right from wrong.

This relative position may have appeal as a philosophy, but it is not much help if you are being beaten, robbed, or raped or if your teen is standing before a judge charged with a felony.

The idea that people learn the skill of “moral reasoning” comes from the work of Lawrence Kohlberg. I was first exposed to this concept when I read Dr. Lakona’s book Raising Good Children. These steps or stages of moral reasoning are sometimes subdivided as they develop and change over time. I will summarize their ideas from memory so if errors creep in they are my errors.

A. Primitive right and wrong.

It is fair if I get what I want and not fair if I do not get what I want. The young child might say “It’s not fair I did not get a red one and I wanted a red one.” Fairness and right and wrong are all about getting what you want. Other people’s wishes do not enter the equations.

In this version, we trade right and wrong. This comes from learning to share with siblings and playmates. So if you do something nice for me I owe you a good deed. If I do for you and you do not reciprocate then I can do whatever I want.

This stage of moral reason comes up sometimes in relationship or marriage counseling. One party believes they have been wronged by the other and therefore they are justified in doing something to hurt the other party.

People who stay stuck in this tit-for-tat stage of moral reasoning are destined to be disappointed and have a life full of conflict or they become a permanent victim as others let them down.

Eventually, most people begin to resolve their moral dilemmas by resorting to authority’s opinions. At first, it may be mommy and then later it will become the teacher.

Plenty of people abrogate their need to determine right or wrong by following a leader and asserting that if the leader says it is right then they should know.

This faith in authority explains why people can be convinced to follow a leader and do horrific things because that leader told them it was the right thing to do. If that leader can convince you that God or correct politics is on his side then you might be convinced that killing others was a moral thing to do. Even if in the back of your mind you question this leader, the weight of others who follow the same leader will pressure you to adopt that leader’s version of right and wrong.

Somewhere in the adolescent years, our peers start having more influence on us than adults. If you join a gang, then their norms become your criteria for right and wrong. If you hang with drug addicts then you develop a “hustle” and stealing or other criminal activities stops being wrong and becomes acceptable.

In a previous post, I wrote about why trying to resist peer pressure is a choice doomed to failure and why sooner or later all humans give in to peer pressure or change their peers.

Many people come to believe in the rule of law. They memorize the law, regulation, or bylaws of an organization. Their appeal for right and wrong always goes to what the law says. People quote the constitution or other law as evidence for their belief in what is right and wrong. We have a supreme court to make just those fine distinctions as both sides in the argument can see how the law agrees with what they want the right and the wrong to be.

Others resort to a particular religious book, the Bible the Koran, or what have you. They are often adept at finding a verse to quote that establishes that they are correct in their view of right and wrong. As with other laws, these religious documents may also have other portions that lead to a different interpretation and there are religious wars a plenty over which religious book is the right one or the wrong one.

It is reassuring if you can find guidance in a book or law that eliminates the need to judge right and wrong but it does not always lead to a correct way of behaving.

Beyond all these ways of separating right from wrong, there is in most of us a gut sense that regardless of what the authorities say, what our friends may tell us, or the holy book appears to be revealing, there is this fundamental thing that just does not feel right.

We have established by war crime trials, though some will disagree with this, that just because your party, leader, law, or religious book seems to sanction a practice there are some things that are inherently wrong and should not be done regardless of who says to do them.

Not everyone reaches or wants to reach this higher level of moral reasoning but it should be something that is encouraged if we want to avoid the excess of relying on leaders who might use their position, the law, or the religion, to justify doing fundamentally wrong things.

These are some thoughts about ways moral reasoning may develop. In a future post let’s look at the errors that may creep in along the way to better moral reasoning.

1 thought on “Does your family know right from wrong? Moral Reasoning”