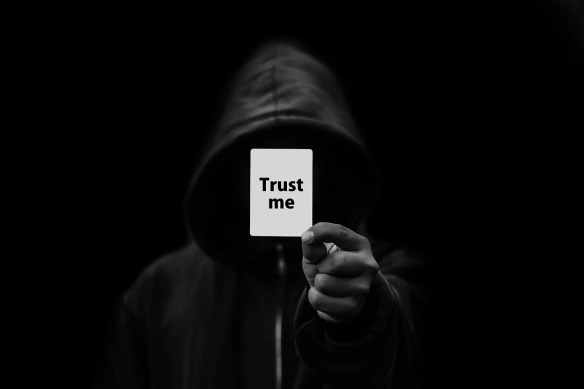 You can use conspiracy theories to get people to believe almost anything.

If you can convince people that others are out to get them and that you are telling them the truth, you can get them to sign on to believe almost any lie. Trying to get people to accept things that aren’t true isn’t a new idea. Propaganda has been used to push political and religious beliefs as far back as we have recorded history. Marketers and advertising specialists try to convince you to buy their product or give them your money.

But the use of conspiracy theories, the blaming of other people for all your ills, is a recurring phenomenon. Dictators and totalitarian regimes have always used the big lie. The battle between truth and the big lie isn’t a new one. But in the age of social media, the big lie can be spread rapidly. Groups of people using multiple social media accounts and encouraging everyone to share their posts, whether they read them or not, can spread untruths so far and wide the people begin to believe them. Here are some of the ways manipulators convince people to think something bogus.

If you tell your lie loudly and often enough, it gets believed.

Keep putting that lie out there, even if you must keep changing your story. Spread it on social media any way you can. Encourage everyone who reads it to share it with everyone they know. Keep that bizarre idea live by how often you tell the story and how fiercely you defend it.

When challenged, keep changing your story.

Use contradictory beliefs. Offer lots of arguments in favor of the lie you’re telling, even if they contradict each other. Don’t worry about contradicting yourself, simply present lots of reasons people should believe you. Your goal here isn’t to prove you’re telling the truth. What you want to do is create so many doubts about the reality that the lie seems plausible.

If you get pinned down, tell them that it might be true.

You can avoid responsibilities for your lie if you quote others and say you don’t know, but it might be true. Saying that someone else believes something can be mistaken for evidence that your lie is the truth. You can get away with spreading lies if you don’t take responsibility for what you’re saying.

Tell people to be suspicious of anyone who disagrees with you.

Try to convince people that authority figures always lie to them. Tell them that scientists fake their data. The medical profession is out to cheat them out of their money. Any news media or authority who agrees with the established opinion must be in on the conspiracy. Anyone quoted as an authority it must be part of the secret plot. Keep changing who you blame. The more possible suspects, the more people will believe someone has perpetrated a crime.

Tell them all authority figures are evil.

If you attribute evil motives to everyone else, it’s easier to get people to believe you. You would never lie to them, would you? Accuse anyone who disagrees with you of intentionally harming others to get what they want.

Keep telling people something must be wrong. Keep them looking for reasons to believe your lie and disbelieve the facts. Sowing doubt about the facts opens lots of possibilities. You don’t have to prove your big lie; you just have to get people to doubt the truth.

Tell people they are victims.

Keep insisting that someone or something is out to get us. No matter how gigantic the conspiracy would need to be, insist that someone is trying to take advantage of all of us. Blame the rich. Blame the corporations or the government. Blame some hidden secret society.

Tell people not to believe any evidence that disagrees with you.

If you want to sell your lie, well keep telling your victim that everyone else is lying to them. Tell them not to believe anything they read in the news. Insist that all evidence that disagrees with you is just further proof of how vast the conspiracy is.

Keep trying to find patterns even when they don’t exist.

People who promote conspiracy theories, those who try to get us to believe fantastic things, love to look for meaning in seemingly random events. If you watch any compulsive gambler, you’ll see them looking for patterns in the cards or dice. If the number seven hasn’t come up for a while, bet on it, it’s due any minute. Probability theory tells us every number is equally likely. People who are trying to get you to believe a fantastic tale will take evidence from various countries, various points in history, and try to connect them into a pattern and then tell you that some secret power is controlling you.

How do you avoid being the victim of conspiracy theories?

Remember that a secret only stays a secret until one person tells a second person. The idea that massive numbers of people could’ve come together to perpetuate a lie for any reason and then keep a secret from the rest of the world is highly unlikely. People want to manipulate you by lying to you will keep pointing to some unknown force, which is the cause of things. Learn to do critical thinking. What are the chances that all the authorities are wrong, and the person who wants you to believe something else has somehow discovered the secret?

Most of the ideas for this blog post were originally published on: